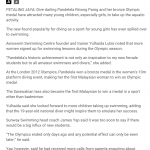 The new-found popularity for diving as a sport for young girls has even spilled over to swimming.

“Pandelela’s historic achievement is not only an inspiration to my new female students but to all amateur swimmers and divers,” she added.

At the London 2012 Olympics, Pandelela won a bronze medal in the women’s 10m platform diving event, making her the first Malaysian woman to win an Olympic medal.

The Sarawakian lass also became the first Malaysian to win a medal in a sport other than badminton.

Yulhaida said she looked forward to more children taking up swimming, adding that the 19-year-old national diver might inspire them to emulate her success.

Sunway Swimming head coach James Yap said it was too soon to say if there would be a big influx of new students.

“The Olympics ended only days ago and any potential effect can only be seen later,” he said.

Yap, however, said he had received more calls from parents enquiring about beginner classes for their children.

“I believe our athlete’s performance could be the reason,” he said.

However, he also noted that new students should follow proper training procedures, as Pandelela’s training was at a more advanced level than that offered at private swimming centres.

“We have had people writing to us asking if they can take up diving.

“It is certainly good for the future of Malaysian sports if Pandelela’s achievement inspires more young girls to train as divers.”